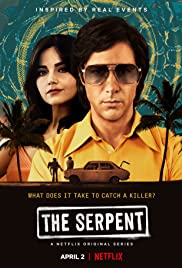 Available on Netflix, this mini series is addictive, literally and figuratively. Charles, the main character, goes by many names but is a mixed heritage "gem dealer" living in Bangkok. He hooks up with a beautiful young tourist(Jenna Coleman who played Victoria several years ago on that series), and she becomes aware of his "dealings". He befriends, drugs, often kills young hippie tourists in the 70's in Bangkok. Then steals their identities and any cash or traveler's checks them may have. A young diplomat in the embassy of the Netherlands realizes over time that two young Dutch tourists who have disappeared are dead and misidentified as Australians. Once he has the scent, he continues to follow it regardless of the harm to his career. I binge watch over two days-8 episodes. Creepy, yet mostly true!