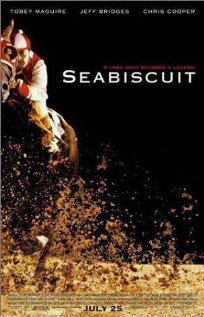 True story of the 1938 Horse of the Year

This charming true story of Seabiscuit will warm your heart whether or not you are a race fan. It tells the story of the people who rescued Seabiscuit, so to speak, but as they say were, in fact, saved by this horse who was the biggest money winning racehorse of his time. During the Depression, he was a source of inspiration for the nation as he was a small horse who seemed to be lazy. However, after being sold to Charles Howard, the auto magnate, Seabiscuit got a new trainer and rider and began to win. Seabiscuit, in fact, was the grandson of Man o' War perhaps the greatest horse of all time. You will love the ending!