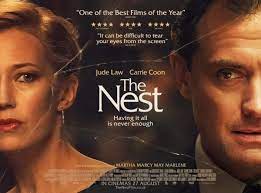 A good film but tough to watch, at times. After a move from the "sunny" US to foggy, dark London things begin to unravel for Rory and wife, Allison. Carrie Coon(stars in The Gilded Age) is terrific as is Jude Law who plays a self absorbed businessman who "invents" in order to make a big splash. As problems arise, he begins to lose the support of his wife who takes a job on a neighboring farm in order to stash some cash. It appears major disasters are coming, but...some come and others do not. The ending comes after a difficult and shocking Friday night. Is it optimistic or not? Let me know what you think! Seems to be set in the late 1980's.