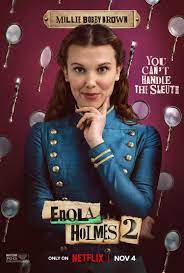 Enola Holmes, Sherlock's ward and young sister, is having a tough time with her new detective agency. A young "match girl" appears and appeals to Enola to help her by finding her sister. Of course, Enola signs on and begins another adventure involving industrial espionage, bribery, missing money and murder. She gets arrested in the process, escapes with the help of her Mother, Helana Bonham Carter, and joins with Sherlock who is working on a parallel case. Based, actually, on a labor situation in the late 19th century in London.

Very enjoyable movie. But then I always a fan of Sir Arthur Conan Doyle's work. The movie is a bit slow at the start, but quickly gathers steam. Very glad to see the Mother (Helena Bonham Carter) more involved in this movie than the first Enola. And the collision of cases was a delight. Worth watching.