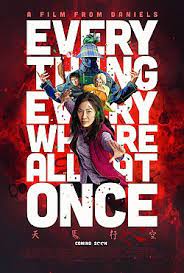 Everything Everywhere All At Once

Sci Fi take on multiple universes with each one having a version of Evelyn, A California based laundromat owner

I wanted to love this movie, but did not. The cinematography and acting, as examples, are impressive. It has been nominated for 11 Oscars including the spectacularly talented Michelle Yeoh as Evelyn. However, it seems like a tedious bad dream. In short, Evelyn leads a disappointing life as an immigrant living in California who with her husband and daughter run a laundromat. They are in trouble with the IRS(Jamie Lee Curtis is their examiner) and Evelyn's father is a bit of a burden. Suddenly, a man looking like her husband tells her she is the savior of all the verses(short for all the universes). Evelyn has a similar Evelyn in every "verse" all of whom seem to be successful... unlike Evelyn. She is meant to save all the "verses" from a version of Evelyn's daughter, Joy. The mayhem builds throughout the movie with some parts showing only 2-3 seconds per "verse". Evelyn decides to take her own path but the length of repetition of this film is tedious. Lots of Oscar nominations so probably you should stream, but this allegory, strange sci-fi films just didn't work for me!

I am relieved that I am not the only one who did not like this movie. My husband and I watched it after the Golden Globes and stopped watching about half way in, which we Never do. Just too tedious for us!

Well, I have several other friends who didn’t care for the movie…some stopped watching it before it was over. I was even turned off by the previews! So guess I’ll try it because of all the nominations but I’m prepared to agree with you!