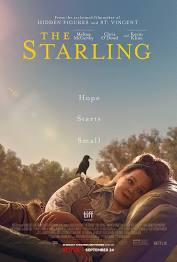 Couple loses child and while husband in is mental facility, his wife Lilly fueds with a Starling

More Drama than Comedy as Melissa McCarthy, Lilly, keeps going after the death of her baby daughter and her husband's hospitalization in a mental facility. Jack, her husband, only wants to die while Lilly finds a Vet, formerly a Psychiatrist who helps her mostly through her troubles with the Starling who attacks her regularly. It is great to see Kevin Kline again. I love his acting. Moving but not too heavy, The Starling, is worth the watch!