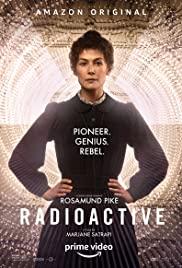 Marie Curie was the first person to be awarded two Nobel prizes - in physics and chemistry. But this is the story of her turbulent personal life - as a young Polish student in Paris, as the wife and colleague of Pierre Curie, as a widow who struggled to raise two daughters, but ultimately as a fiercely independent female scientist in a world of men.
Available on Amazon Prime.   Radioactive

Close call on a 4 Chick rating; however, if the story of Marie Curie doesn't not rate at least 4 chicks, what does? Rosamund Pike stars as Marie, a Polish scientist in Paris who meets and marries Pierre Curie after their discovery of radioactivity which was the name she coined and their discovery of two new elements. Together they won the Nobel prize and later Marie won in Chemistry. She is the only person to win two Nobel prizes in different fields. Her daughter later won a Nobel prize and as an extended family they have won more Nobel prizes than any other clan. In France, radiation treatments are named after Curie. Of course, as she predicted, bad things like the atomic bomb could also happen. This Amazon Prime film is interesting if not great. A little dramatic at times, perhaps. I might have preferred a narrator instead of flashes to the future. At any rate, loved seeing Rosamund Pike inhabit this famous scientist who fought for and won respect. You can find on Amazon Prime. click https://www.amazon.com/?_encoding=UTF8&tag=chicksflcom07-20