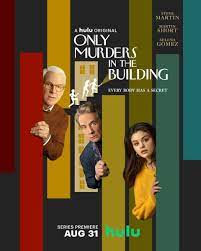 Only Murders iIn the Building Season 2

Charles, Oliver, and Mabel are caught up in another "murder" in their building...this time Bunny Folger, the board president.

I have been anxiously waiting for the next season of Only Murders In the Building. Well, it is here with the first two episodes available on Hulu and another 8 or so episodes dropping every Tuesday. At the end of the first season we see Bunny Folger, the despised Association President, dying in Mabel's apartment. Mabel is covered in blood! Well, all three, Charles, Oliver and Mabel are arrested but released. Of course, they are the main suspects. At a gathering in Bunny's apartment, Bunny's mother waltzes in. It's Shirley MacLaine and she has a fabulous backstory. I love this building and its characters. I think it's going to be great!