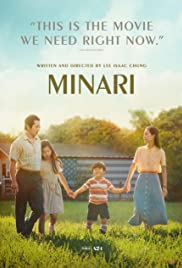 Paced but interesting film as Korean family tries to make a go of land never successfully farmed. Some setback, occasional reprieves. Grandmother arrives from Korea and plants Minari on edge of local stream. Disasters follow and the couple cannot seem to share the same vision. The son, David, has a heart issue but Grandmother seems to push him forward. Executive producer is Brad Pitt. Nominated for Oscar for best picture