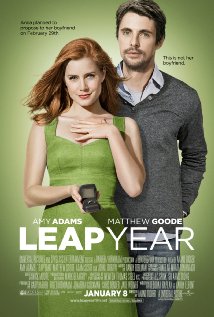 Anna Brady flies to Ireland to propose to her boyfriend on Leap Day as her father has repeatedly told her that an Irishman must say yes on Leap Day. Of course, getting to Dublin turns out to be quite difficult!

This charming movie starts out a little slowly; however, the predicatability lessens in the second half and there are interesting surprises as the story progresses. Amy Adams is a type A personality who is determined to get to her boyfriend, Adam Scott, before Leap Day is passsed. However, because of weather problems, she ends up hiring Matthew Goode to drive her to Dublin from the small village she has ended up in. There seems to be no chemistry at first, but.... Well eventually she gets to Dublin and viola her boyfriend with whom she has bought a high end New York Condo decides he wants to propose. The end? Not so fast!

I enjoyed this movie, a typical chi k flick formula, but nice.