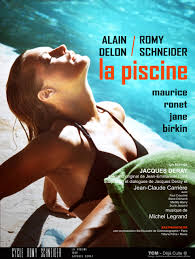 1969 French Film set in the South of French near St Tropez at a country house with a large pool, around which the plot unfolds.

Sumptuous film set near St Tropez in the South of France. A couple(Jean-Paul and Marianne) is vacationing at a friend's country house and are enjoying his large pool when Harry, Marianne's former beau, and his 18 year old daughter arrive and stay. Jean-Paul (Alain Delon) at first is not too pleased to have guests but starts to enjoy the daughter played by Jane Birkin. The famous Hermes Birkin Bag is named after her, by the way. The loose sexual 60's don't seem all that risqué today but yet tensions rise. Harry knows just how to twist the knife into Jean-Paul who has recently had a disappointment in his career. Yet Jean-Paul is a very cool dude and was called by some the French James Dean. Marianne is played by the luminescent Romy Schneider who looks like a million bucks! Sadly, Schneider died 12 years later at age 43, but Delon is still active at 85. The music, the pool, the dance scenes all reflect the late 60's. It is currently showing in New York City to sell out crowds, but can be streamed as well on Criterion for example.