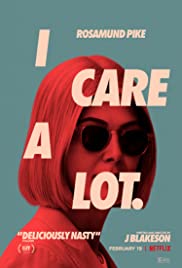 I Care A Lot

Interesting idea for a movie...Rosamund Pike( who won for her performance- Golden Globes) plays Marla who is a legal guardian who commits the elderly and then scams them. One day she gets a lead from a doctor, one of her accomplices, and goes after Jennifer Peterson. However, she is unaware who Jennifer Peterson really is. Eventually, this story sinks to a fight between the nasty, bad women and the nasty, bad men. Really, I was not anxious for either to win. There is, however, a twist which was unexpected. Really very well written and interesting story. Just hated the characters so much!!!

I have mixed feelings about this movie --- acting was great (I love Dianne Wiest), but none of the primary characters have much to compliment them on. Their despicable. It did give me fuel for thought about my own senior guardianship status (I have no kids) and to get my ducks sorted out about care way before it's needed. But why this was nominated for a Golden Globe in the Best Actress in aMusical/Comedy category baffles me -- it's neither a musical or a comedy. Bizarre.