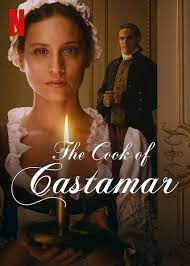 Series set in 18th century Spain about a cook, who is more than she seems, and a Duke who has lost his wife

This Lavish story(on Netflix) is a bit far fetched, but still has its charms. The costumes, scenery, sets and palaces are fabulous. Set in the early to mid 18th century in Spain near Madrid, Clara who has lost her father is sent to be a kitchen helper at the castle of a Duke who recently lost his wife. Not surprisingly, she soon becomes the head cook because of her skill which also catches the attention of the Duke, his brother, and his Mother. In 12 episodes, you see lots of evil intrigue, false fronts, and wierd backstories. However, I had to watch the whole series in two days. I didn't think the story was as compelling as it might have been with many unanswered/ambiguous questions. Never-the-less, I was fascinated by the "look" of this Spanish series. The subtitles are easy to read and each episode at less than an hour is very watchable. Based on a novel of the same name by Fernanco J Munez.