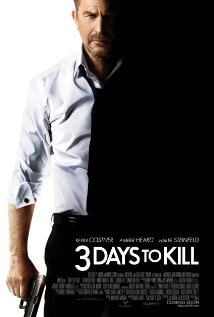 Kevin Costner is Ethan, a CIA killer, who discovers he is dying and is blackmailed into a final killing spree in Paris.

If you love Paris, you will enjoy all of the sights of Paris. While 3 Days to Kill is a violent killing movie (rated only PG13) the subtext is the story of Ethan who is estranged from his wife,Tina, played by Connie Nielsen and daughter, Zoey, played by Hailee Steinfeld. Vivi is a top CIA agent in charge of killing an international dealer in dirty bombs and his entourage. She enlists Ethan with the promise of a drug which can prolong his life as he arrives back in Paris to see his daughter and wife. Ethan shows a soft side except when he is killing-a skill at which he is very adept. The so so personal story makes the movie watchable and even enjoyable. His daughter, Zoey, is a handful especially when his wife leaves Zoey in Ethan's care as she makes an emergency trip for business to London. Kevin Costner is still a good looking guy, but he needs a shave and a better toupee. When he finally puts on a suit, he looks much better!

I was laughing every time his daughter called him and you heard her special ring tone. Kevin always answered even if he was torturing someone. This is a good time take your mind off movie.