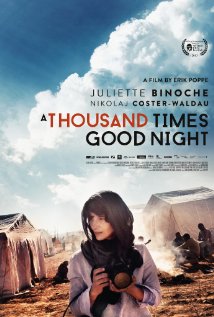 Rebecca is a top war photographer motivated by anger to show the stories of victims worldwide of the corrupt governments and corporations. After she is nearly killed in an explosion in Damascus, she must face her family in Ireland.

Occasionally, a movie has a real impact. This winner of the Toronto Film Festival's Grand Prix 2013 is one of those movies. Juliette Binoche plays Rebecca who is one of the world's top war photographers. She often disregards her own safety in order to show the story of suffering and corruption in the world...usually in the Middle East or Africa. Following a suicide bomber, she herself becomes a victim and almost dies in the explosion. Her husband, Marcus, played beautifully by Nikolaj Coster-Waldau is an Irish marine biologist tracking plutonium in sealife exposed to a distant nuclear reactor. Her two daughters along with Marcus live in fear that Rebecca will not come home from an assignment. With the loss of her family looming, Rebecca decides to give up war photography to save her family. When her teenage daughter, Steph, asks to go to a "safe" assignment in Kenya with Rebecca, Marcus suggests they go, but with predictable and disastrous consequences. This movie has an impact. As usual Binoche is excellent. The images of the film are striking and one wonders whether the story is not close to home for some involved. While you may anticipate the ending of the movie, the story never-the-less compels you to watch until the story is final.